get in touch
- back to posts
Start Here → Drawer Organization
share

Whenever someone mentions the need to get more organized, we always suggest they start with a drawer. Why?  Because it’s manageable and nearly impossible to fail at.

If you think about the reasons we’re unorganized or become unorganized, it almost always has to do with time and the overwhelming feeling of not knowing where to begin, so, you don’t. By starting with a drawer, the scope of the job remains relatively small as does the chance for burnout before completion.

Think back to a time when you bit off more than you could chew. It’s typically mid-project when stuff is everywhere. You look around and think ‘why did I even start this?’ anxiety levels rise and you quit, often leaving things in a worse state than when you started. We’ve all been there but this is exactly what we want to avoid.

Ready to get started? Whether tackling a drawer in the kitchen or one in the bathroom, follow these five tips on how to organize your drawers like a pro. [Step 3 is something I recently started, after realizing I kept sticking items that didn’t belong back into the drawer. Major saver!]

Step One: Remove everything from the drawer. Everything!

Step Two: Group like items; i.e. if you’re organizing a junk drawer, you probably have various writing utensils, like pens, pencils, and sharpies. Pick them out and put them together. Bonus points for ensuring they all still work before restoring.

Step Three: Anything that doesn’t belong in the drawer, place in a bin or tote. Segregating these items keeps them out of sight so you can keep moving—rethinking and reexamining oddball and misplaced items slows down progress and increases the chances that they work themselves back in.

Step Four: Time to return items. We always recommend organizing small spaces using drawer organizers. They contain, provide uniformity and discourage from ­­placing things where they don’t belong; e.g. you are less likely to put a battery in an organizer that contains pens because there is an established order.

Tip: Before you purchase drawer organizers, examine your needs and measure, measure, measure! There is nothing worse than getting started then getting halted because you don’t have enough or you have the wrong thing. 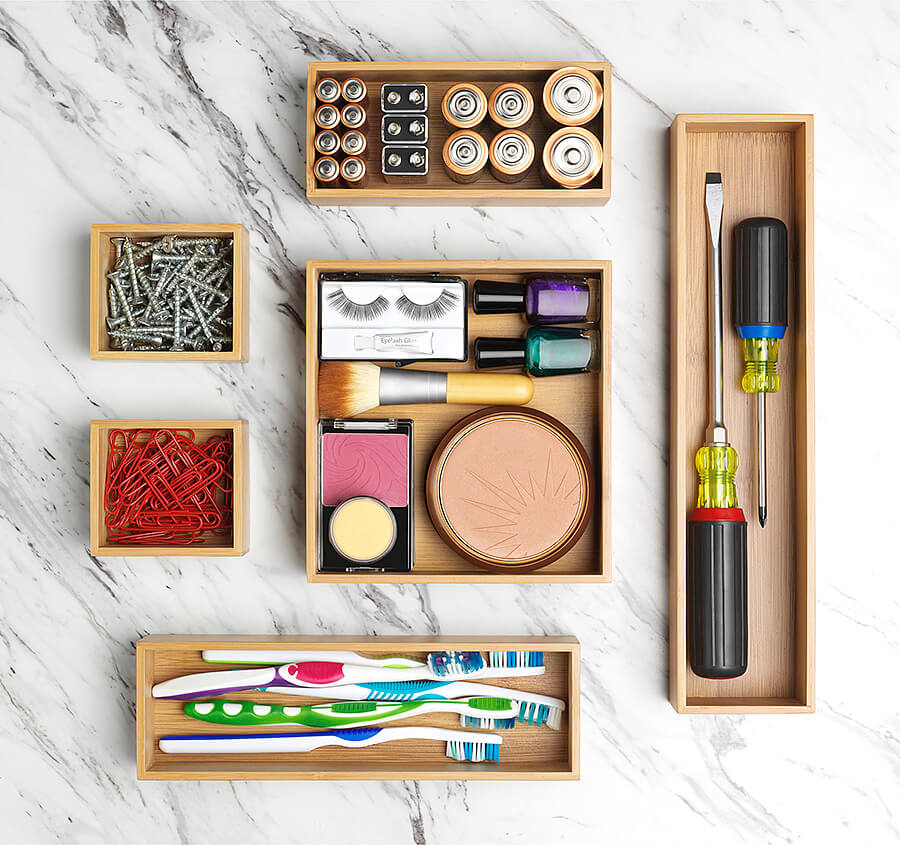 Step Five: Grab the “Doesn’t Belong” bin and return miscellaneous items to their proper home. For me, being able to quickly gather up items that don’t belong, in any room, makes the task of tidying up a little less daunting—out of sight but not out of mind, unlike shoving things in a drawer.

There’s no doubt your de-cluttered drawers will have you feeling accomplished, proud, perhaps even inspired, but the best is yet to come. The real reward in reducing clutter is received daily, in the form more time and less frustration.

What are some of your tips on how to organize your drawers? Share your DIY drawer organization hacks in the comments below!